What is functional underwear?

Functional underwear are all those garments that are worn directly on the skin and take over the moisture management, especially during sports activities. This means that this type of underwear absorbs body moisture and sweat caused by movement and quickly transports it away from the skin to the outside. In the process, the functional fibers absorb the water molecules in their fabric, distribute them generously and transport the moisture further to the outside. Thanks to the quick-drying properties of functional underwear, the wearer does not get an uncomfortable or damp feeling. Versatility deserves another plus point. Functional underwear can be worn all year round. During the hot summer months, it allows good ventilation to protect against overheating, and in winter, these garments warm due to good insulating properties. Functional underwear comes in different designs and shapes. These include underpants, long underpants, ¾ thights, sports bras, long and short baselayers.

Why should you wear functional underwear?

We all know the well-tried onion principle. This refers to a widespread principle in the outdoor industry of putting several layers on top of each other in order to be able to react flexibly to changing temperatures and activities. To do this, you need a breathable jacket. But the best functional jacket is of no use if the underlying layers retain moisture and prevent breathability. This is exactly where you need to be able to fall back on reliable functional underwear for sweaty pursuits. In addition, conventional underwear made of cotton is unsuitable for sports, because the cotton fibers absorb sweat excellently, but then do not release it anymore and the moisture accumulates.

Functional underwear is basically made of two main materials. The functional fiber and merino wool. Combinations of both raw materials have also established themselves on the outdoor sports market, and quite rightly so. What are the advantages and disadvantages of each material and the material composition, you will learn in the following comparison. 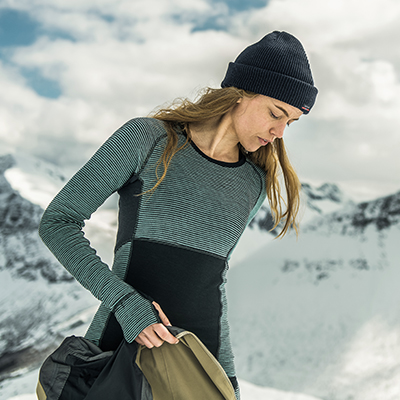 How should functional underwear fit?

There is one rule of thumb to follow: In order for moisture transport to function properly, functional underwear should fit close to the body. Only if the material lies directly against the body (without constricting or chafing) the moisture can be absorbed effectively. In addition, functional underwear should be cut close to the body, as it is worn as the first layer under midlayers and thus serves as basic equipment. With a snug fit, unnecessary bulky fabric and possible chafing can be prevented. Recommended are parts with flat seams (flatlock) or directly without seams (seamless). In the latter case, a special circular knitting process is used. This minimizes or eliminates any chafing or pressure points that may occur, for example under the backpack, at the waistband or under the armpits. When it comes to the cut of functional underwear, the intended use and personal taste play a role. Slips, for example, offer more freedom of movement, while panties or hot pants should cut in less. For winter, the classic long (thermal) underpants are available in different leg lengths, for example as a ¾-length version. These are particularly suitable as ski underwear, as they prevent chafing and pressure points when worn with ski boots.

How do you care for functional underwear?

The functionality of underwear goes and falls with its care. Proper care of functional underwear, in turn, depends on the materials from which the garments are made. Therefore, beforehand and for each individual item, first study the care instructions, as the manufacturer may give care instructions that differ from common tips. In general, synthetic fibers can almost always be washed in the washing machine without any problems. Check the enclosed care instructions to see if the pieces are suitable for the dryer. Functional underwear made of merino wool may also be machine washed, depending on the model and material composition. For this, a gentle wool washing program should be selected and special functional detergent added. Under no circumstances should bleach or fabric softener be used. Garments made of merino wool must not be put in the dryer. The fabric would be affected by the high temperatures and rotary movements. Merino underwear should only be air-dried, which can be done conveniently on the clothesline. If you do not use the functional underwear for a longer period of time, store the pieces in a well-sealing closet or laundry box. The closure should not be airtight, but should provide protection from annoying insects.

* Please note our information about shipping and shipping times to international destinations.